AirDroid is one of the greatest tools for managing an Android device from a computer. They can use it to access their address book, send SMS, share photos, and receive desktop notifications, among other things. This Windows version contains the same functionality as the web service, with the added benefit of not requiring the use of a browser. You need to register an account to log in.

Features of AirDroid Personal are:

Transfer files at high speeds in both ways and manage documents across platforms, allowing users to operate more efficiently. AirDroid Personal has received a lot of positive feedback from users all over the world as one of the most popular file transfer apps. AirDroid Personal not only allows users to move files between systems without the use of cloud storage, but it also allows them to share files with friends and even strangers.

Open AirDroid PC application on the left menu click on your mobile under My devices after that you can move the files from your PC. It will be copied to your device.

People can take full control of their Android devices without having to root them; they simply need to connect to the AirDroid PC client for a quick setup and then do whatever they want with their Android devices remotely. AirDroid remote control is simple to set up and use, even if their gadget is on the other side of the world. People who need to control an Android device remotely from another Android device should install AirMirror on the controller device. AirDroid has a basic mirroring capability, but users who want more control can use AirDroid Cast, which allows them to operate the phone from their computer. Without rooting, users can control their phone and access mobile apps from their computer, allowing them to use their phone on a larger screen.

On the left menu click on the telescope button and select your mobile under My devices after that click on Remote Control button to access the device . 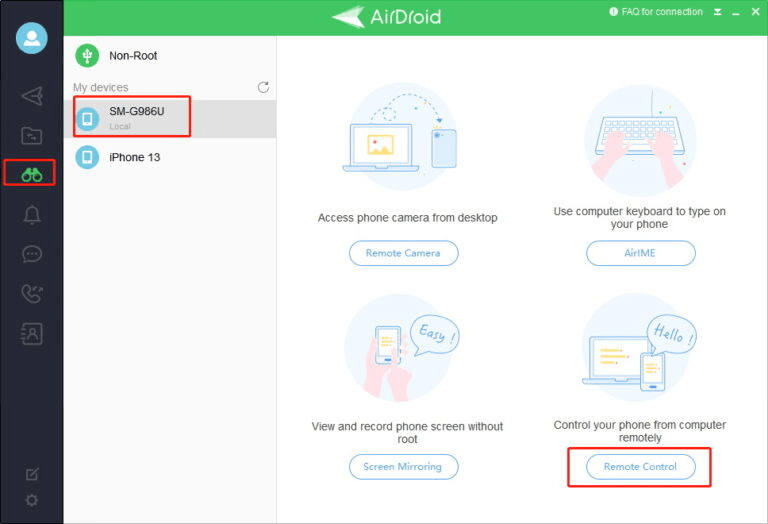 After connecting you can manage the device from a PC application with keyboard and mouse. 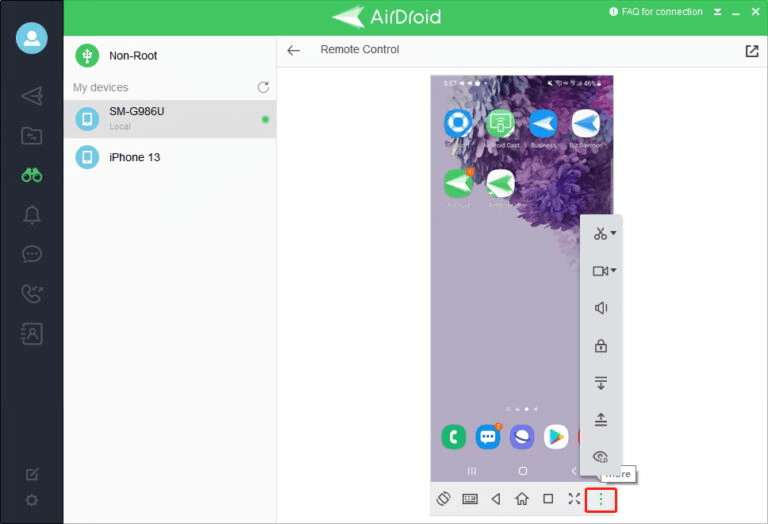 People can share their screens with their students or partners by wirelessly mirroring their Android devices to their computers. People can also use AirDroid to stream their broadcast, making it easier to share games or photos with their audience. Screen mirroring does not necessitate that the phones and computers be connected to the same network. A useful approach for a variety of applications. AirDroid Personal Screen Mirroring is a free tool that allows users to mirror their phone”s screen to a computer over a local or public network. Even if the devices are not connected to the same network, users can wirelessly mirror their phone screen to their computer to share information with students or customers.

On the left menu click on the telescope button and select your mobile under My devices after that click on Screen Mirroring button to establish a connection. 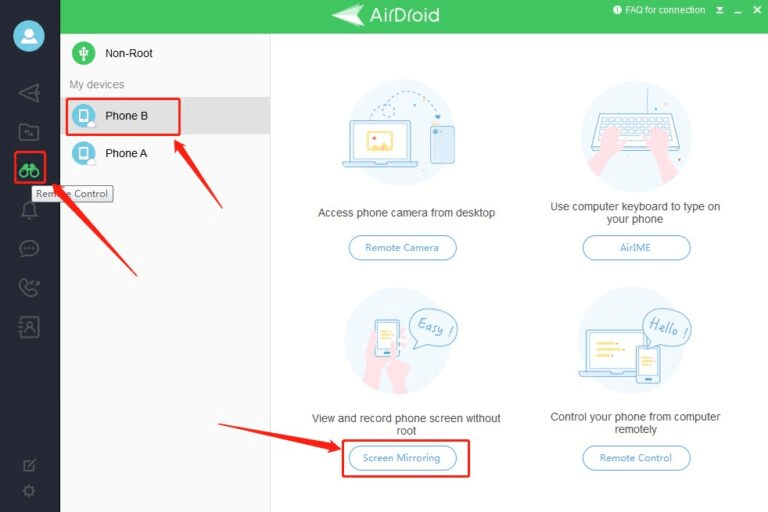 AirDroid allows consumers to concentrate on their work by allowing them to handle their phones from their computers. People can use their computers to receive and send SMS, connect to headsets, enter or copy phone numbers, and make calls. Users can sync their phone”s app notifications to their computer and respond to them immediately from their desktop using the Notification function. Important messages are constantly updated. AirDroid Personal syncs the phone”s notifications to the user”s PC, allowing them to read and respond to crucial app messages directly from their computer. Allow people to receive and send text messages, make phone calls, and receive notifications while focusing on the screen, ensuring that they never miss essential communications, even at work.

Utilize underutilized Android phones as their eyes by utilizing the remote camera feature. With One-Way Audio, users may monitor their surroundings or listen in on environmental sounds without having to keep their eyes on the screen. People can keep an eye on newborns and pets, as well as secure their homes, without having to invest in new cameras. They can keep an eye on their surroundings by controlling the camera on their phone from anywhere, which is a good approach to looking after their family in an emergency.

The AirDroid app, created by Sand Studio, allows users to wirelessly transfer various sorts of files between their computers and devices as long as they are connected to the same Wi-Fi network. It can also be used to share files with other users who have the app and are on the same network as them.

Vehicle Technology To Help Avoid Accidents On the Road